Last September we had a friend from back home come out for a beautiful fall visit. As a long time friend of Matt’s, he knew he came to the right person(people) and the right place to find adventure on his vacation days!

One of the nights Matt and I decided to take him to a spot in the hills of Idaho Springs for a fairly easy little hike and his possible first back-country over-nighter – we had been there maybe once or twice for a day hike when there was snow and became fond of it.

As we were ascending, we had come upon a couple of big boulders amongst the trees that we decided to rest at and considered setting up camp.

Oh how I now love the idea of back-country camping for free in National Forest land!! …Who would’ve thought?!

As I sat there looking around at the beautiful scenery, my brain couldn’t help but become flooded with ideas of making a shelter out of the perfectly solid boulders right in front of us. We were surrounded by hundreds of incredibly tall but skinny fallen tree trunks and limbs.

Before I knew it, I was on a mission!!

One by one, I felt like I became Superwoman lifting up these gigantic limbs any way I could and carrying them to the boulders to form a structure. I first started laying them across the top of the two boulders to make a roof; there was a perfect area behind one of the boulders for me to stand pretty level with the top, making it not too difficult for me to carry and lay them up there.

Who would’ve guessed that something as childish as fort building out in the woods would elate me to such a level!?

Doing this all by myself reminded me just how strong, capable and creative I am! It’s easy for me to sometimes lose sight of that or even just lack the energy to give something my all. Well, not this day! I found something so precious within me this day that got me dreaming and playing like a kid again! I feel like this was yet another reminder to me that I finally felt and lived firsthand, just how important it is to never lose not only the voice of your inner child, but your energy of your inner child as well.

Matt shows me this all the time by just being himself :).

After a few hours of hauling trees back and forth, back and forth, I noticed the boys finally starting to take notice of what I was creating and then they quickly jumped aboard. I was indeed very grateful for the help to get my vision moving, but also extremely grateful that I got a whole few hours or so of getting lost playing as a “kid” in the eternally alluring woods I never experienced growing up.

The boys couldn’t believe all that I had accomplished alone while they were off or around doing who-knows-what; the only attention I paid was to what I was doing!

With them now helping, we all ended up getting so enthralled with this project that we continued to work on it into the night – with headlamps lighting the way until 10 or 11pm!

We just HAD to get it done!

I was truly having one of the greatest times of my life and didn’t want to stop until it was finished! I’m sure the boys could say close to the same – but surely couldn’t be nearly as invested as I was.

We finally ended up calling it a night since I had to work the next day, and I believe his friend was leaving early to go back to Illinois. Matt and I were able to set up our double hammock inside of the fort that night and had our first ever attempt at sharing the dang thing.

which is supposedly made for two people technically, but we found out REAL quick that we did not agree with that marketing.

Being the heavy sleeper that I am, I didn’t have nearly as much trouble sleeping as poor Matt. But hey, at least we gave it a try!! At least it definitely looked really cool – ha!

Although, we realized after that, that we may need to try fitting both of our single hammocks in there instead – or just straight up leveling out the ground to have a proper “bed” space.

One of our greatest ideas was using straightening out our rainfly on the ceiling to prevent any precipitation from seeping through the small spaces in the log roof – genius!

Another great thing is that the inside is so spacious you can fully stand up and walk around in it! We even have a “backdoor” and “balcony” off the back that perfectly allowed us to climb up onto one of the supporting boulders and have a beautiful view out into the hills, directly facing Mt. Evans.

And as silly and ironic as it sounds, this fort also brought light to both Matt and I’s memories of a childhood obsession to one day have a house with a tree growing through the middle of it!!? Both of us!

We have had many of these ironies in the somewhat short time of knowing each other. But anyway, this tree was awesome in so many ways – perfectly just being itself – and just so happened to be the center of attention inside our creation without us initially knowing!

The next day after our friend and I left early morning, Matt was “off to work” and took it upon himself to make the finishing touches to the fort. He spent a good little chunk of time hauling some quite heavy stones to line the perimeter of the fort to make it a little more stable.

After doing that, he definitely ended up putting in just as many hours as I did! In total, it took us short of two days but there are definitely still some upgrades that we would both love to add at some point.

(I sadly have only mostly videos at this point in time which can’t be uploaded onto this platform; will eventually change that!) 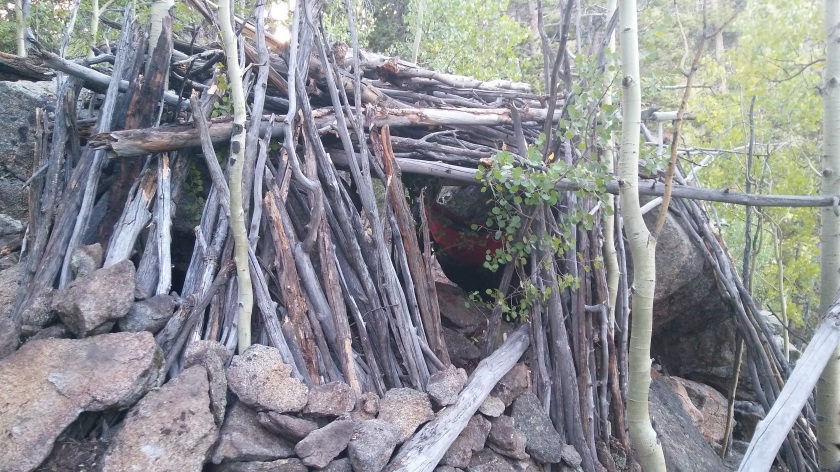 We now have a lasting memory and physical space in the mountains we can return to! It’s so neat visiting it during the changes of every season. It will hopefully also inspire and give shelter to any other adventurers who may stumble upon it!

Who knows – maybe we will become The Mysterious Serial Fort Builders……. ;).

Go to as secluded and peaceful of a place as you can find and just sit and listen.

Meditate; see what comes to you!

Maybe you will start feeling nostalgic and end up freeing and embracing your inner child?

Have fun, reflect, and enjoy this time! 🙂